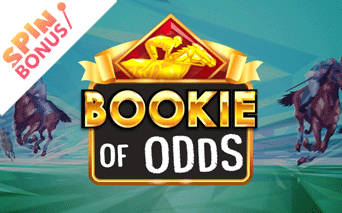 As the name of this online casino slot game suggests, Bookie of Odds is a sports betting-themed slot, in particular, one which has chosen to focus on horse racing. Developed by Microgaming – who already have a few decent sports betting-themed titles in their inventory – this game is cheap, and affordable for all, offers both re-spins and free spins, and has been designed in coordination with Triple Edge Studios.

Bookie of Odds slot has five reels like any standard video slot, and there are three symbols per reel. A total of 10 paylines span those reels, and they are non-adjustable. There isn’t really a need to alter them, though, with bets costing as little as 10p a game. Of course, players with more cash to splash can increase the value of their bets, but up to no more than £25 a turn. Prizes are non-progressive in nature and are capped at 500x a bet, with the punter (or bookie) being the most prized symbol in this game, which has an RTP rate of 96.5%.

A golden, shimmering book is used to represent both the wild symbol and the scatter icon in this game. Scatter wilds are very valuable to players, as they cut down the number of useless symbols appearing on the reels which may hinder players from landing a win. Scatter wilds in this slot can substitute for any other icons in the game to help form a winning combination on the reels.

Players will note that beneath the reels of this release are re-spin buttons. There is also a price indicated. On any spin, players can choose to hit the re-spin button, and that particular reel will spin again, offering players a chance to bag a win. However, the price you pay for this feature depends on what symbols are on the reels and how much your stake is worth. Back to scatter wilds now, these can trigger a free spin bonus when three or more appear on the reels during a base game spin.

Players will start Bookie of Odds slot free spins bonus 10, 12 or 25 free spins, provided they landed three, four or five scatter wilds on the reels of the base game, respectively. Once the bonus round begins, players will note that a symbol is chosen at random to appear as an expanding icon. Every instance of this random symbol on the reels will expand to cover an entire reel, provided it has the potential to feature in a winning combo. The bonus round can also be retriggered should players land three or more scatter wilds on the reels while the feature is being played.

Bookie of Odds slot is a basic game, but it is one that tackles a theme seldom represented in the online casino world. The graphics are decent, it offers both re-spins and free spins and is dirt cheap to play. Players can expect fair returns for those bets, and the slot should be widely available at any casino offering Microgaming slots.