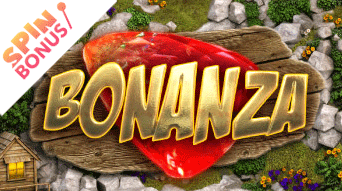 Bonanza was one of the very first MegaWays slots to be released by Big Time Gaming. Since its debut, the game’s MegaWays engine has become a phenomenon. So much so, that rival developers have loaned it for their own games. It all began with Bonanza, though. With that in mind, what is this slot all about?

Bonanza utilises the MegaWays engine for its gameplay. This means that not only are there six reels to the game, a random number of paylines also appear before each spin. In total, as many as 117,649 lines can appear. Despite the surplus of ways to win, bets are as cheap as chips, at just 20p per spin, and no more than £500 a pop at their costliest. Non-progressive jackpot prizes are capped at 50x a wager, and the return to player rate is decent, sitting at the 96% mark.

Like many of these types of games, Bonanza megaways slot features a “reaction” engine. This means that following any win on the reels, the winning symbols are taken away and replaced by new ones. This makes it potentially possible for players to land multiple chances to win on a single spin. Only when no new wins occur does this feature come to an end.

Wild symbols also pop up in this game, and they show up as dynamite symbols. These icons can replace themselves with any icon you may need to win, save for the scatter icons. Those scatters pop up as G, O, L and D icons. Naturally, if they appear on the reels in that order, then you will trigger the slot’s principle bonus round.

Another symbol that players may wish to keep an eye out for is the crystal. It is the best-paying icon in the game at 50x your stake and can pay out considerably more than other icons, including the second-highest paying symbol, the ruby. By contrast, that symbol can cough up no more than 7.5x your total bet.

The main bonus round is a free spin feature. Bonanza’s bonus offers 12 free games to plays, but every extra scatter you find on the reels is worth another five spins. The reaction engine is also in play during this bonus feature. Multipliers are applied to consecutive wins with that feature, and there is no cap on how high they can rise. Players can, in theory, retrigger this feature indefinitely, provided enough “gold” scatters keep popping up on the reels of this game.

Bonanza megaways slot has set the benchmark high for many of the other MegaWays slots which now appear at the best casino sites. Before the release of this game, Big Time Gaming was not particularly well-known. That has all changed now. Bonanza is ideal for players operating on all sorts of budgets. Its prizes are petite, but few players will grumble at that given the number of ways that there are to win on the reels of this release. As you might imagine, this slot can be found at most major casino sites across the net.