There have been voodoo-themed slots before, but none are quite as creepy nor as visually impressive as Yggdrasil Gaming’s Baron Samedi slot. Players are looking at quality 3D graphics, a frightening theme and a unique way of acquiring bonuses via collectable cards in this game. All of this put together makes Baron Samedi stand out as a one-of-a-kind release. 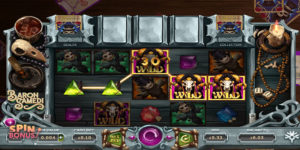 The slot doesn’t seem so original if we only take its paylines into consideration. There are 25 of those lines spanning Baron Samedi’s 5 reels. However, playing with all 25 of those lines will cost players as little as 10p a game, and you can’t really beat that.

At the opposite end of Baron Samedi’s wagering spectrum, bets cost no more than £125 a pop. Such cheap stakes mean that this game was always going to sport a lower non-progressive jackpot than usual, but at 120x a bet, it is still decent enough to warrant giving it a go. The Baron Samedi RTP (return to player) rate is capped at an impressive 97%.

One thing this game is not short of are special features. Wild symbols take the shape of goat skulls, and these will naturally replace all bar the bonus icons to help players land wins on the reels of the slot. 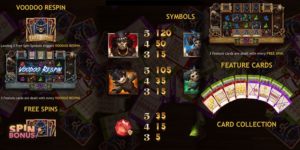 Players will note that to the right of the reels, cards can be accumulated. These can only be acquired during the two spin features in this slot. There are four types of cards (each with a different level), and these can dish out handy features when card collections are completed. Those features include stacked symbols, mystery symbols, mystery reels, multipliers worth up to 10x, symbol upgrades, a guaranteed five-of-a-kind win, random wilds, wild reels, and random wilds which are always placed in the best position on the reels.

There are two spin bonuses to appear in Baron Samedi slot. Firstly, players who land 2 human skull bonus icons will trigger a re-spin bonus. This consists of one Voodoo Re-spin, with three cards dealt from the pack to be used during this spin. 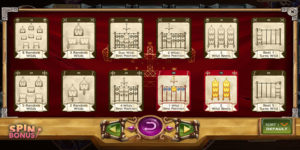 The second feature in Baron Samedi is a free spin bonus. This is triggered when 3, 4 or 5 human skull icons show up on the reels. It promises 7, 12 or 15 spins and three new cards will be added to your collection on each spin. Players can pocket additional free games if they manage to complete a card collection while playing. If this occurs, a completed card will become locked for the duration of the bonus round.

This Yggdrasil Gaming developed slot sets the bar high for others to follow. Baron Samedi dishes out tasty wins, cheap bets and goes further with its voodoo theme than many rival slots have thus far done. The unique gameplay which revolves around card collecting is quite new for the slot world and should bring a sense of excitement to this release, even if the voodoo theme isn’t necessarily your cup of tea.