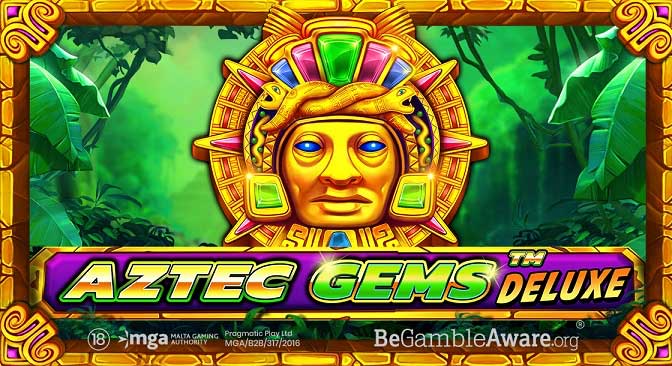 Bet level starts ranges £0.09 to £90.00. The game is also equipped with an Autoplay option to enhance your gaming convenience.

What are The Feature Symbols?

In Aztec Gems Deluxe slot, the golden totem symbol is a wild. It can substitute all other symbols but has no power over the Money symbol. The wild symbol can appear on any reel. The wild symbol offers £50.00 for its appearance 3 times on the reels.

On every spin, the Money symbol fetches a random value from a set that remains predefined. It may also receive one from set small jackpot values. When 4 or more such symbols hit the reels, the Money Respin feature is triggered.

When the winning combinations for the lines are provided, the Money Respin Feature begins. All other symbols vanish, but the Money symbols triggering the feature remain in view. Special reels substitute the normal reels, containing only Money symbols and empty spaces.

To start, you will have 3 respins. Every Money symbol that you hit during respin remains on the screen until the round ends. Every time a symbol hits, the respins count is reset to 3 respins. The round will end when all the respins are used or when all the blank spaces are filled. Then, the values of all the symbols are totalled and paid out.

At the end of this feature, if the reel’s blank spaces are filled with a Money symbol, another random feature is triggered.

Why You Should Play Aztec Gems Deluxe Slot

Although this Pragmatic Play game contains only one special feature, Money Respin Feature is more than enough to bring you glory.