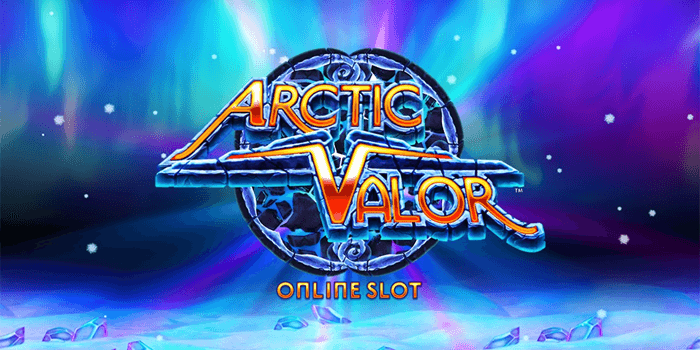 This powerful online slot focuses on an intense Arctic adventure whilst encountering passionate battles between mighty Nordic warriors, supported by a glittering display of the Northern Lights and a snowy backdrop.

Over 4000 possible winning combinations come as a result of the ‘Any Adjacent Pays’ feature of Arctic Valor slot; meaning that win patterns can occur anywhere of the reels, as long as your 3 like for like symbols appear on adjacent reels.

How To Play Arctic Valor Slot

Bet as little as £0.15 or as much as £15.00 and use the Quickspin feature if you’re short on time (this speeds up those spins and reveals the outcome at a faster pace). You also have the option of the Autoplay method, featuring a variable loss limit as well as a win limit.

The four enchanted warriors constitute the highest value symbols, followed by weapons including swords and a crossbow, whilst the colourful snowflakes are the lower value representations. There is a distinct wild symbol, which performs as expected by substituting all paying symbols in the game. There is also a mandala-style scatter symbol, which is only present in the main game.

A frequent feature that occurs in both the main game and the bonus game is described as the Icicle Feature. A random occurrence, the Icicle Feature can trigger after any spin. You’ll observe at least one icicle drop onto the reels and landing on a variety of positions. Click the icicles to reveal your feature prize; this could be wild symbols – hopefully triggering a winning combination on the reels – or potentially a cash prize. The Icicle Feature activates often and can truly boost your bankroll.

How to Get Arctic Valor Slot Free Spins

Hitting at least 3 scatters on the reels triggers 7 free spins. Each bonus spin triggers the Icicle Feature, with the icicles sticking on the screen until the end of the bonus feature. Furthermore, enhance that bonus win with a full stack of a warrior on the reels which will increase the correlating icicle above up to 3 positions.

Why You Should Play Arctic Valor Slot

With pay mechanism such as those featured in Arctic Valor, in addition to bonus features aplenty, the prizes are often delivered thick and fast in this entertaining, high calibre slot game.

Where Can I Play Play Arctic Valor Slot?