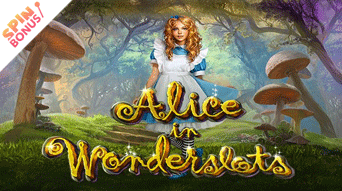 Few players will need telling that this Playson release is, of course, themed on Lewis Carroll’s Alice in Wonderland. If the clue in the title didn’t give it away, the imagery which appears on the reels of this fun-filled slot certainly would do. Alice in Wonderslots isn’t the first game to be released at online casinos with this theme, but it has arguably gone on to be one of the more popular ones.

Alice in Wonderslots has a positively excellent set of graphics. Everything from grinning Cheshire cat to the angelic-looking Alice herself is expertly designed. This video slot is also cheap as chips to wager on. Alice in Wonderslots costs as little as 20p a turn, while you can wager up to £60 a spin if you’ve got a bit of cash to splash. A non-progressive jackpot is worth approximately 500x your stake, and to win that you’ll need to land 5 of the Queen of Hearts symbols on a line. Playson has made this a medium-variance slot with an RTP (return to player) rate of 95.2%. That is the industry standard, so there will be no complaints there.

The insanely smiley Cheshire cat springs up as the wild symbol in Alice in Wonderslots. It is an icon that can substitute for any others that you may need it to, apart from “Eat Me” symbols and Alice herself. Those Eat Me icons are free spin triggering symbols, and players will want to land at least 3 of those on the reels during a spin to trigger such a feature.

As for Alice, she can pop up on any of the reels. When she does, she can expand to cover up to 4 positions on the reels. For every two spots she covers, players will pocket a 1x multiplier. Therefore, if Alice covers four spots, players will bag a 2x multiplier which can double the value of any win in which an Alice icon plays a part.

After players have landed 3 or more of the Eat Me scatters on the reels, they will start the Alice in Wonderland’s free spin bonus. This consists of just 20 free spins, but oddly enough, no multiplier. There are no further perks to be bagged in the bonus, either, save for Alice’s ability to potentially double your wins as mentioned above. On the upside, you can at least retrigger the bonus by acquiring 3 or more scatters on the reels while the free game feature is being played.

Alice in Wonderslots has gone on to become one of the leading Alice in Wonderland slots around. It commonly appears at many top casinos. That shouldn’t come as a surprise. This slot is a far more genuine take on the theme than many of its cheesy counterparts. The features are also decent, which always helps. If you’re into Alice in Wonderland and want to try a top slot themed on it, then this release is worth tumbling down the rabbit hole for.