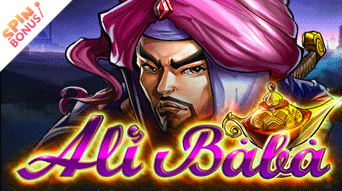 Leander Games have developed more than a few Arabian Nights-themed slots in their time, Ali Baba slot is just one of them. Properly known as Ali Baba and the Forty Thieves (to give the slot its full name), this release features witty graphics, good gameplay and two very agreeable bonus rounds, one of which is a click and win feature, and the other a free spins bonus round.

Ali Baba and the Forty Thieves offers a standard gaming structure for players to bet on. Expect five reels and 20 pay lines, with the latter alterable as any player sees fit. This, of course, means that bets can be surprisingly cheap if players want them to be. If you’re wondering how cheap; how are you fixed for 1p per line per spin? At their costliest, wagers in the Ali Baba slot can rise as high as £100 a game, but no higher. With its 96.6% RTP (return to player) rate, and 2,500-coin non-progressive jackpot cash prize, it is fair to call Ali Baba a generous paying, low-variance slot, too.

A rather saucy version of Jasmine pops up in this slot, and she is capable of substituting for any icons you may need to land wins. She is no ordinary wild symbol, though. Jasmine can also expand to cover entire reels when she can play a part in handing a victory to players. She cannot replace bonus or scatter icons, though, but this is to be expected of any wild symbol in almost any slot.

Ali Babba himself is somewhat rugged and scruffy in this game, he can dish out wins worth a non-progressive 2,500 coins when five such symbols appear on a line.

As for the scatter icons, they appear as pots of gold. These symbols can deliver scattered cash prizes worth 5x, 25x or even 100x your stake if 3, 4 or 5 lands anywhere on the reels.

Two bonus icons also pop up in the game. The Gold or Bandit bonus is triggered when three urns appear on the second, third and fourth reels. An Open Sesame free spin bonus is yours if you land free spin symbols on the first, third and fifth reels.

In the Gold or Bandit bonus, players are given between 1 and 3 “Ali Protections”. They can then select from six vases for cash prizes. If players land a monkey, they are out of the game, unless they carry an Ali Protection, which acts as a life.

The second feature is the Open Sesame free spins bonus. This allows players to choose low-risk spins (more spins with petite multipliers, but with wins more likely) or high-risk spins, which offer fewer turns but with higher multipliers and less likely wins. After this, players can select from a series of chests to win a number of free spins and multipliers. The bonus begins right after that.

There is a lot like about Ali Baba and the Forty Thieves, although most of that is down to the special features. This slot has a similar theme and graphics to many Arabian Nights themed games, but the special features mean that Leander Gaming’s entry into this genre is superior to most others.