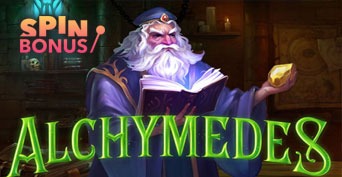 As any player is likely to be aware from the very moment that they open the Alchymedes slot, this is a game that is all about alchemy. Developed by Yggdrasil Gaming, Alchymedes may not have the most inspiring theme ever to be found in such a game, but this slot does at least have nifty graphics and ample features. It also boasts an original gaming engine which adds creativity to the list of its qualities.

Alchymedes slot coughs up 30 pay lines, all of which can be bet on. They span the slot’s five reels, and although lines are fixed into place, bets are still cheap. Players can expect a floor bet of just 25p a game here, while ceiling bets do not exceed £100 a game. Those are bizarre wagering limits for a 30-line game, but that’s Yggdrasil in a nutshell. Top prizes are capped at 500x a player’s wager. The slot has a bog-standard Yggdrasil RTP (return to player) rate of 96.1%.

Wilds appear somewhat unoriginal in this release (one of the few things that are). They show up as neon green blocks of text and can take the place of any icon you need to win a line. However, the way they work is entirely original. Notably, they have a few added goodies they can bestow on players when they appear, too.

If wild symbols (marked in red) appear on the reels, the spots marked in green will then turn into wilds. This creates a random pattern of wilds to help players land wins.

Every time a player lands a win, the background of the symbols featured in the win, will turn a nice gold colour. If players managed to turn all the positions gold, then a level is completed. Moreover, every win can raise a multiplier which is applied to the last win a player lands when they finish a level.

Completing a level will see players start the next one with a more valuable multiplier than the previous level. Moreover, they will also get to choose a better wild pattern or other goodies. Some of the nifty things that they can acquire when they start a new level include 2x or 3x multipliers, an increasing multiplier on each spin, one or two extra wilds added to patterns, or a one-off instant cash prize worth 2,000 coins.

There is no real bonus round in Alchymedes, so the bonuses you receive for completing a level are as good as it gets. They can massively boost your gameplay the move levels you complete, though.

Alchymedes slot has plenty to offer. Original gaming, lots of features, a cheaper than expected wagering range and fair prizes are all assured with this Yggdrasil slot. It is commonly found at most major UK and Scandinavian online casinos, too. If players are tired of the same old slots and want to try something new and different, then playing Alchymedes slot comes highly recommended.