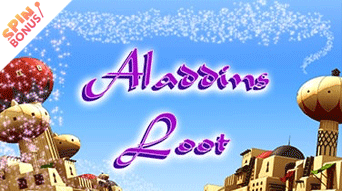 Aladdin’s Loot is a Genii developed slot and one which opts for a very Disney-like take on the Arabian Nights tale. The imagery used on the reels is near enough a spitting image of those found in the animated hit. There are few touches of originality within the game’s features which help distinguish it from the many other similarly-themed slots which can be found on the net.

What Are The Stake & Ways to Win?

This is your average, run-of-the-mill video slot. Aladdin’s Loot has basic features which can be found in most other slots, its graphics are simplistic at best, and its wagering range and pay line structure are common. There are 25 pay lines spanning this slot’s five reels, all of which can be selected individually. This gives players a wagering range which rises from 1p per line per spin up to no more than £25 a game. Top prizes are capped at 7,500 coins in all and are yours if you can land five wilds on a line.

Aladdin acts as a wild symbol in this game. Whenever he appears on the reels, he can substitute for any other icons barring scatter icons. He is also the best-paying symbol in the game, as mentioned. By contrast, scatters and the Jasmine character can only pay out 2,500 coins and 2,000 coins, respectively, compared to the 7,500-coin non-progressive prize which is up for grabs via the wilds.

How Do I Get Aladdin’s Loot Free Spins?

There are two scatters available in this slot. The genie can dish out scattered cash prizes when they appear anywhere on the reels. The magic lamp symbols are far more beneficial to players, though. Lamps can trigger a free spins bonus when 3 or more show up anywhere on the reels of Aladdin’s Loot during a base game spin.

Once players land 3, 4 or 5 magic lamps on the reels, they will start a bonus which dishes out 10, 15 or 20 free spins to players. Anything a player manages to win in this feature will be doubled thanks to a 2x multiplier. Moreover, the feature can also be retriggered.

To do this, players need to land 3 or more scatters on the reels. What could be simpler? Oddly enough, though, the scatters are not as forthcoming in the bonuses as they seem to be in the base game. This does tend to make things a little bit trickier to reactivate the bonus round.

Aladdin’s Loot is fun enough to play, although most players would stop short of calling it exciting. The rudimentary features, wagers and pay lines are all commonplace in most other slots, so there is nothing new in terms of gameplay here for you to discover. Moreover, the theme of the game is essentially the same as all the other Arabian Nights slots, albeit with more Disney-centric graphics spread across the reels. Aladdin’s Loot is a fair and modest game, though it is never going to be a world-beater for Genii.