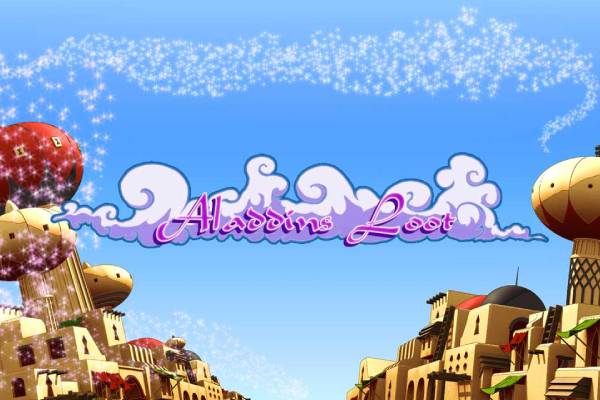 This slot game, based upon the classic tale, features 5 reels laden with Disney-style imagery and symbols. Aladdin’s Loot slot has 25 lines crisscrossing those reels, and these can be altered if you wish to play with fewer.

A considerable non-progressive jackpot is there to be won. In all, it stands at around the 7,500-coin mark, which makes this slot game worth a punt, even if the theme isn’t necessarily your favourite.

At its cheapest, Aladdin’s Loot is an inexpensive game which will set you back a bare minimum of 1p per line per spin. However, if you wish to up the ante in the slot can bet up to £25 a turn on this game.

Who else but Aladdin could turn up as a wild symbol in the game named after him? As a wild, Aladdin can substitute for any other symbols barring special icons. There are two of these in Aladdin’s Loot slot, but one of them literally does next to nothing.

The genie is officially a scatter icon, in that it counts no matter where it falls on the reels. However, the symbol doesn’t trigger any bonus rounds or special features. It can, however, cough up decent wins when it appears on the reels.

Now, the magic lamp is a far more valuable symbol to land on the reels if you can get it. These symbols don’t deliver instant cash prizes (unlike boring genie scatters), but you do unlock a free spin bonus round, where the riches are considerably better than anything you can win with traditional scatters.

How to Get Aladdin’s Loot Slot Free Spins

You are required to land at least three of the magic lamp scatters to trigger the free spin round. A total of 10, 15 or even 20 free spins await you, depending on whether you activated the bonus with 3, 4 or all 5 of the game’s scatter symbols. Triggering the feature with three is common enough but landing all five is a tall order in this game.

Once the round begins, you will note that wins can quickly be accumulated. This is because there is a 2x multiplier in play during the feature, and that will double the prize of any winning combination which shows up on the reels. Another perk will see the feature easily retriggered by landing more scatters on the reels while the bonus round is in play.

Why You Should Play Aladdin’s Loot Slot

The familiar theme and generous free spins bonus feature is enough to have us itching to play this Genii Gaming slot.

Where Can I Play Play Aladdin’s Loot Slot?