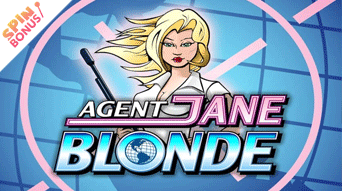 Agent Jane Blonde slot is easily one of Microgaming’s more notable video slots found in almost all online slot sites in the UK, and can commonly be found at all major online casinos which offer slots from this provider. The game centres its theme on a female version of James Bond, known rather unimaginatively as Jane Blonde. Plenty of the imagery which appears on the reels of this slot has a spy theme to it then. As it is one of the older releases from this provider, players should expect primitive graphics and gameplay options.

What Are The Stakes & Wagers?

This is a game that contains just nine pay lines spanning its five reels. Players do not have a significant degree of control over their bets, with stakes costing at least 9p per spin, although that involves having all nine lines active. At the opposite end of the wagering range, players can bet up to £90 a game on the Agent Jane Blonde slot. Prizes are capped at 10,000 coins, are non-progressive and are won when five wild symbols appear on a line in this slot, which has a return to player (RTP) rate of 96.1%.

Aside from merely doling out a non-progressive prize, the wild symbols can also double the value of any winning combos they appear in. Wild symbols take the shape of Agent Jane Blonde herself, and can replace any others you may need to win a line, save for scatters.

Those scatter symbols pop up as Agent Jane Blonde logos. They can deliver wins worth 2x, 5x, 20x or 500x a stake if 2, 3, 4 or 5 appear anywhere on Agent Jane Blond’s slot reels. The symbols will also trigger a free spin bonus – the only bonus of its kind – in this slot. Players need 3 or more to activate this feature.

Following any win, players can choose to trigger a gamble feature in the Agent Jane Blonde slot. When they decide to do so, players can potentially double or even quadruple their winnings in a basic click a card game. The odds of success are no higher than 50%, though, so perhaps this is something players may wish to give a miss.

How Do I Get Agent Jane Blonde Free Spins

Back to the free spin bonus now, and what it can offer you. Initially, players are offered 15 free spins with this feature. During the bonus, anything a player manages to win will be tripled. The free spin bonus can also be retriggered by landing 3 or more scatters on the reels once more. However, that is about as complicated as the free spin round gets. You have to remember, this is an old Microgaming slot, and the bonus round was cutting edge at the time of its debut.

Agent Jane Blonde slot may not have the excitement, the special features or the graphics of its sequel (Agent Jane Blonde Returns), but it does still offer handy non-progressive cash prizes. The simple gameplay also makes it ideal for all players who are just taking their first steps into the online casino world.