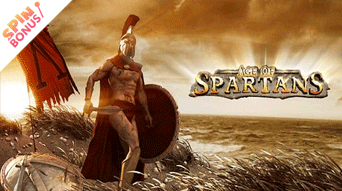 Age of Spartans Slot has been designed and developed by Genii. The game itself uses 3D graphics to showcase its symbols, although the level of 3D quality in those graphics probably looked best back in 2012. Nonetheless, this 300-inspired game focuses a lot on the City-state of Sparta, and its role against the Persians at the Battle of Thermopylae.

What Are the Wagers & Player Returns?

This simple slot game only features nine pay-lines on its reels, and yet players do have the option of adjusting both those pay lines and the value of their wagers. At its cheapest, players can expect to find bets which cost as little as 1p per line per spin.

However, most players are going to want to play with all the lines and probably larger stakes. At most, this Genii developed slot will cost you no more than £11.25 a spin. A non-progressive jackpot worth 10,000 coins can be won in this game, although it should be noted that the RTP (return to player) rate is diabolical, at just 90.6%. That reason alone may be enough to put many players off trying this title.

Given the lacklustre RTP rate, players are going to need to make any special features they land count doubly so. Wild symbols can appear as King Leonidas himself, and he doesn’t waste any time making himself useful, doubling the value of any winning combination in which he plays a part. Wilds can replace all other symbols barring scatters.

Those scatters appear as arrow-laden shields, and they can trigger a free spin bonus when 3 or more scatters land on the reels in any position during the base game.

A gamble bonus has also been included in this game. It can be activated following any winning spin and offers players the chance to double or even quadruple a recently acquired win. They must guess the colour of suit of the next card in the sequence, and guessing incorrectly will see players lose their winnings. It is best to stay away from this feature, which offers a 50% chance of success at best.

How Do I Get Age of Spartans Slot Free Spins?

When players trigger the free spin bonus, they will be treated to a total of 15 turns. Anything that is won during this free spins bonus is automatically tripled courtesy of a 3x multiplier. Players who land three more scatters during this feature can retrigger it. That is about as complex as things in this round.

The graphics aren’t great, the features are predictable and run-of-the-mill, and the RTP rate is so low that it is positively criminal. There won’t be too many players queuing up to play this release, which just doesn’t tick enough boxes to be appealing or overly successful. It is not that the slot isn’t fun, or that it lacks bonuses – just that it doesn’t pay very well, and could be regarded as unfair. By all means, give it a run for its money if you want, but you can’t say that you haven’t been forewarned.