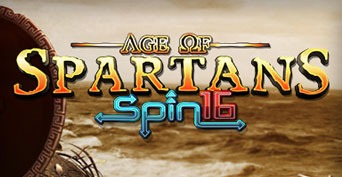 The original Age of Spartans was not the best slot ever devised, the woeful RTP rate and dodgy graphics meant that the release didn’t quite work out as developers Genii had planned. In the Age of Spartans Spin 16 slot, they have another crack at it, although this time using their Spin 16 gaming engine. Graphically, the slot is still quite poor, but has the gameplay improved? Has the Spin 16 engine made a difference to Age of Spartans?

Only marginally. Age of Spartans Spin 16 is a 30-line slot, as opposed to its 9-line original. It also offers total customisation of the paylines, with bets costing as little as 1p per line per spin, and no more than £75 a game. The RTP (return to player) rate rose from 90% to 93.99%, but that is still below the industry standard. A non-progressive jackpot of 4,000 coins is fair, but hardly something too many players are going to sing and shout about.

There hasn’t really been a major improvement on the special features in Age of Spartans Spin 16 slot. The wild symbols here behave just as they did in the original game. This means that when King Leonidas appears on the reels, he can replace any other symbols save for scatters and double the value of any wins in which he appears.

Now, what about the Spin 16 goodies? Well, this means that players can choose to spin the reels in any direction they wish. Green arrows can be used to spin those reels, although whether this makes too much difference to the gameplay or your odds of winning is debatable.

A multiplier bonus can appear on the reels, and potentially dish out 10x multipliers on cash prizes at a time. There are also Spin Hot and Spin Cold buttons in this game, and they can point you in the right direction (so to speak) in terms of which way you should spin the reels.

In the original release, the scatter symbols would trigger a free spin bonus. It was boring and beige, but at least it offered you a few different bonuses to bag cash without having to spend any. That feature has been withdrawn from Age of Spartans Spin 16 slot. To make that clear, the only highlight in the original game has been removed from its sequel, in favour of a feature that doesn’t give much back to the player.

Age of Spartans: Spin 16 is quite easily just as weak as the original release from Genii Gaming. It is arguably worse. While this sequel does offer a higher RTP, decent jackpot, more paylines to win on, and the ability to choose which direction you wish to spin the reels, the developers have taken away the free spin bonus, which is not going to impress anyone. It is hard to see any shining light in the Age of Spartans: Spin 16 slot, or its predecessor for that matter.