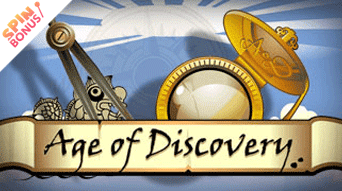 Microgaming’s Age of Discovery is one of the famous casino software provider’s older releases. Understandably, that is already going to put a few players off, namely those who favour new titles which are jam-packed with features. However, there is something still charming about this Columbus-themed release, particularly if you have a soft spot for “pub fruities”. It may be played over a video slot platform, but Age of Discovery isn’t far off being a fruit machine.

Age of Discovery offers up five reels and 25 pay lines for players to bet on, with coin values very adjustable via the shield-like crest located in the bottom left-hand side of the wagering menu. All 25 lines can also be altered, so players are looking at a floor bet which costs as little as a penny per spin. Maximum stakes are capped at £250 a turn, so there is something for players on all sorts of budgets here. Non-progressive prizes are capped at 60,000 coins in all and paid out when players land five golden coins on any payline in the game.

The golden coins also double up as substitute symbols in Age of Discovery. Wild symbols can replace any save for scatter and bonus icons. As mentioned, they can also dish out wins worth up to 60,000 coins in all.

Scatter symbols do not trigger bonus rounds in this slot, which is rare for a Microgaming release. Instead, they dish out scattered cash prizes. Three, four or five sea monster icons appearing on the reels will dish out wins worth 5x, 20x or 80x your total stake, respectively.

It is Age of Discovery’s bonus icons that trigger the slot’s only special feature. These symbols appear as compass icons, and players need 3, 4 or 5 of them to appear scattered in any position on the screen during a base game spin to trigger the Treasure Bonus.

What is The Treasure Map Feature?

Players shouldn’t expect anything too complicated in the bonus round of this release. The compass icon appearing on 3, 4 or 5 of the reels triggers the Treasure Bonus. Once it begins, players will be transported to a treasure map, and there are plenty of “X marks the spot” locations on the map.

Players are entitled to click on them to win instant cash prizes. However, if players uncover the skull and crossbones symbol underneath one of the Xs, then any previous winnings you have acquired are paid out, and the bonus ends. A logbook prize can also be won in this feature, and its value is displayed on the screen at the end of the round.

Age of Discovery may not be the most bonus-heavy slot ever devised and released, but it does do a decent job of being an entertaining pirate-themed game. Most of the symbols are fruit icons, and with the simple gameplay, this turns out to be more of a glorified fruit machine than a true video slot. It is precisely the type of old-school slot that Microgaming tend to deliver so well.