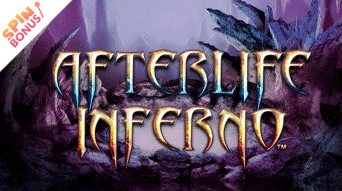 You may have heard of Dante’s Inferno before, perhaps Dante’s The Divine Comedy? Well, they are the basis for the Leander Games developed After Life Inferno slot, which takes a look at some of the most notable characters in the story, and wraps them up in a fiery but fun-filled slot, with plenty of free spin bonuses, and prizes worth up to 5,000 coins. Don’t worry; this slot is a lot more exciting than its theme initially sounds.

Admittedly, the wagering range and pay line structures in this slot are a touch on the beige side. Players will find five reels and 20 lines to the Afterlife Inferno slot and stakes are going to flex between 20p and £200 a game, which is hardly the most adventurous wagering range around. However, there is five-grand in prizes to be claimed as mentioned, and that non-progressive jackpot can be yours if you scrape together five wild symbols on any active pay line.

Afterlife Inferno slot contains many striking symbols on its reels, such as Virgil, Dis, Skiff, and of course, Dante himself. However, the most notable symbol to show up on the screen will be the game’s title logo. This is not only a wild which can substitute for any other standard paying icons but also the slot’s best-paying symbol. It can also double the rate of any winning combo in which it appears.

Players will be able to trigger a Hell Freezes Over feature in this game, and when it occurs, any wilds can transform into a wild reel. Up to 5 wild reels can be bagged in all, and those wilds lock into place for a free re-spin. Should more wilds appear, another re-spin will be issued, and so on, until no new wilds pop up.

Scatter icons can trigger a free spins bonus in Afterlife Inferno. Once a player has landed 3 or more scatters, they will pocket instant win cash prizes and transported to Dis’ castle where they can pick 1 of 3 potential free spin bonuses.

How Do I Get Afterlife Inferno Slot Free Spins

As mentioned there are three possible free spins bonuses for you to choose from in Afterlife: Inferno. The first is the Inferno Bonus, and it offers 15 free spins. Every win will be multiplied randomly by 3x to 15x multipliers.

Alternatively, players could choose the Purgatory Bonus, which provides 15 free spins with wins being offered increasing multipliers which rise by 1x with each win.

Lastly, the Paradise Bonus promises 12 spins, and whenever a wild symbol lands on the reels, it will remain in place for six spins. However, if an Eternity Wild pops up, it will stay frozen for the remainder of the bonus.

Players who like free spins and decent special features are going to find that the Afterlife Inferno Slot has a lot more in common with Heaven than Hell. It has a theme which won’t be everybody’s cup of tea, but few players should care about that given what they can win. Afterlife: Inferno is not a slot which requires too much effort from players, so it is ideal for newbies, also.