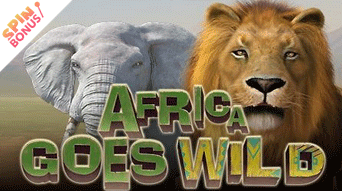 Most casino software providers have tried their hand at producing one-of-a-kind Africa-themed slots before, so why shouldn’t Leander Games give it a go for themselves? Africa Goes Wild slot is their attempt at the genre, and the release is more of an animal-themed slot than a cultural one, with everybody’s favourite savannah and safari animals coming out to play in this game.

Africa Goes Wild slot features over a thousand pay-lines on its five reels. As a matter of fact, there are 1,024 ways to win for players to get to grips with. Moreover, those lines can be played with minimum stakes which cost as little as 40p a spin. Even maximum stakes are unlikely to bankrupt players, being capped at just £20 a turn. For those wagers, players can try and land a non-progressive jackpot which is worth 300x their total stake. For a medium variance game with a high RTP (return to player) rate of 96.04%, that’s not half bad.

Amidst the animals and high playing card symbols of this game is a wild icon. Wild symbols have the sole purpose of substituting for any other symbols you require them to, save for other special icons, such as paw print scatters. Wild symbols appear as lions and constitute the best-paying images in the slot.

That paw print scatters can trigger a Golden Lion free spins bonus if they pop up on reels one, three and five during the same spin. Landing just two of them is somewhat profitable, too, though. Just two scatters is enough to trigger a second chance re-spin feature, whereby players could land that all-important third scatter to launch the feature.

A randomly triggered feature, known as Animal Goes Wild, can also spring into life in Africa Goes Wild. When it occurs, one of the animal icons will be selected to randomly become a wild and thus, a jackpot paying symbol.

How Do I Get Africa Goes Wild Free Spins?

Once the free spins bonus has been triggered, players will start the round with ten free games under their belt. During the feature, wild symbols become even more prosperous. These lion symbols can now double the value of any winning combos in which they appear, courtesy of a 2x multiplier. Golden lions can also appear on the fifth reel (which is where the bonus takes its name from). These symbols can help to fill up a meter above the reels when they appear. Once it is full, the meter dishes out additional free spins, multipliers or will launch the randomly triggered Animal Goes Wild feature mentioned a moment ago.

There is plenty of cute and cuddly, adorable animal fun to be had in this slot, and the features aren’t too shabby either. Given the wagering range, the total number of lines on the reels, and the amount you can win, the Africa Goes Wild slot is undoubtedly a game that players may wish to keep their eyes out for when playing at online casinos offering Leander Games titles.