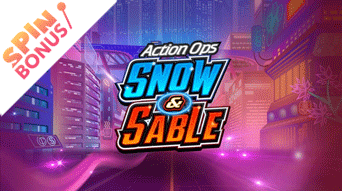 A futuristic game from Microgaming and Triple Edge Studios, Action Ops Snow and Sable slot tells the sci-fi tale of two female cyborgs in an age where technology reigns supreme. Any player that is seeking something to compare it to should think of Adventure Palace (another successful Microgaming slot).

Action Ops Snow and Sable slot is not your run-of-the-mill Microgaming game, though. In fact, there are just 10 paylines sitting on the 5 reels of this slot, so Triple Edge Studios’ touch is quite heavily felt in the gaming structure of this release.

Of course, with so few paylines spread over the reels, bets are cheap. In fact, wagers can cost as little as 10p a game in this video slot, with maximum bets capped at £100 in total. Prizes are fair although not exactly lavish at 100x a total stake, and the RTP (return to player) rate sits nicely at 96%.

The two cybernetic ladies both appear as wild symbols in the slot, and they are more than capable of substituting for other symbols. They can do this for all standard paying symbols, though naturally not scatter icons.

Those scatters are going to be rather handy if players have designs on triggering the slot’s free spin bonus. This feature only becomes active when 3 or more spring up on the reels. This will trigger at least 10 free games, but potentially more, depending on how many scatters appear on the reels during the triggering base game spin.

Once the free spins feature kicks into gear, players will start with 10, 15 or 20 free spins. The number of spins is wholly dependent on landing 3, 4 or 5 scatters on the reels. During the bonus feature, the first and fifth reels turn into wild reels. Snow will take over one of the reels, with Sable occupying the other. At times, though, the two cyborgs may decide to chop and change their positions, although this doesn’t do too much for the overall gameplay. It is worth noting that players can snap up an additional 5 or 10 free spins when just 2 or 3 scatters appear on the reels, which makes adding extra free games to your tally far easier in this slot than other games from these providers.

While Action Ops Snow & Sable slot has some basic gameplay features and a limited number of paylines, its theme does at least make it stand out. Players on a budget are likely to be impressed with the wagering range, even if they aren’t overly pleased with the number of special features or lines. The free spin bonus is easily the highlight of this slot, which can commonly be found at all leading casinos which provide Microgaming slots or feature games on their Quickfire platform. If you liked Girls with Guns or its sequel, there is potentially something here for you to play.