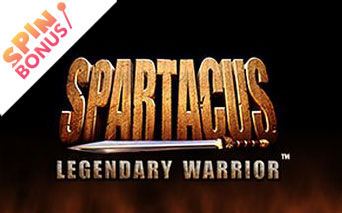 WMS Gaming is widely known for its ability to develop clever (and at times overly complicated) gaming engines in its online slots. After the success of several Spartacus slots, it won’t come as a shock to see that the casino software providers have launched another new game in this series and yes, it comes with a brand new engine. Spartacus: Legendary Warrior certainly takes some getting used to. If you aren’t comfortable with extensive and complex gaming engines, you may want to try some of the other historical slots out there. If you fancy a challenge, read on.

What are the Ways to Win?

Spartacus Legendary Warrior slot is played over 5 reels. This is a game that features between 50 and 100 paylines and is known to set players back between 25p and £100 a game. There is certainly no cause for complaint with that wagering range given how many lines you have open to you. On top of that, the game carries a non-progressive jackpot worth 5,000 coins in all.

Wild symbols are handy symbols to land in Spartacus: Legendary Warrior. The symbols can substitute for all others barring scatters, and wilds have a tendency to expand the payline structure when they appear. In fact, they can expand the reels so that they are up to 10 rows deep, giving players a nifty 100 paylines to win with. Wilds also expand to cover the reel on which they appear.

What is The Re-spins Bonus?

How Do I Get Free Spins?

There are two bonuses for players to enjoy. In the Recruit Bonus, players are offered a total of 12 free spins, with random wilds added to the reels, which naturally means that they expand. Meanwhile, the Hero Bonus promises 12 free spins with random expanding wilds which also offer 2x to 5x multipliers on any wins in which they appear. These can also be multiplied together to provide epic multipliers worth up to 3,125x your bet.

What is The Legend Bonus?

Lastly, there is a Legend Bonus. In this feature, twelve free spins are again offered, as well as the expanding multiplier wilds, but an All Ways Pays system can see players pocket wins with adjacent symbols, rather than them having to appear on a specific line.

Spartacus Legendary Warrior slot is a tricky title to get used to, but the same can be said of nearly any WMS Gaming slot. In fact, the features in this release are nowhere near as complicated as those in other games from this provider. If you enjoyed any of the previous Spartacus games, there is undoubtedly something here for you to like.