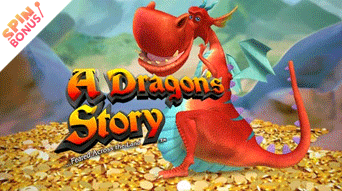 There is something very Pete’s Dragon about the title character of this NextGen Gaming developed video slot. The dragon featured in this game is coloured red and sitting on a hoard of treasure that mighty Smaug would be proud of. Aside from the medieval, mythical theme of the game, though, there are other things about A Dragon’s Story slot which stand out and are worth noting.

This NextGen slot sees its reels nudged to the left of the screen, with the animated dragon sitting on his gold cache to the right of those. Despite the unorthodox setup, there are five reels and 25 paylines there for players to enjoy; wagers won’t be as cheap as you might think, though. In fact, a minimum stake spin on this game costs 50p a game, while maximum bets are capped at £12.50. There is a varying RTP (return to player) rate to deal with here, depending on whether players have wagered a “Super Bet” or not. Non-progressive jackpot prizes are capped at 2,000 coins in all.

The Super Bet mode is an optional side-bet but this raises the cost of your stake rather considerably. When wagering without this mode, wild symbols can only appear on the third reel. Wagering on Super Bet Level 1 or 2 can see wilds added on the second, third and fourth reels, or all reels, respectively.

Wild symbols can replace all icons barring jewel symbols, which act as the slots scatter. Scatter symbols can appear on all reels, players will need at least 3 of them to do so if they hope to trigger this slot’s free spin bonus round.

At any point in the game, a Brave Sir William Bonus feature can be triggered. This will give players the chance to select a fireball to win an instant cash prize. These winnings could be worth up to 1,250 coins in all.

Of course, there is also a gamble feature in the game, just like in other NextGen Gaming releases. It can be triggered following any win and can see players potentially double or quadruple their winnings, based on the colour of the suit of the next card in the sequence.

As mentioned, there is a free spins feature to be won in this game. Triggered via the scatters as mentioned above, this free game features offers a total of 10 free spins. During those spins, any winning combinations you land will be worth double the standard rate of pate. Extra wilds can appear on the reels depending on whether you are playing with one of the Super Bet bonuses active or not.

A Dragon’s Story slot was one of the first new NextGen Gaming slots to feature 3D animated graphics and a new look to the reels. It is a decent effort and provides prosperous enough features. We would stop short of saying it offers excellent value for money, though, as the minimum wager is costly, to say the least.