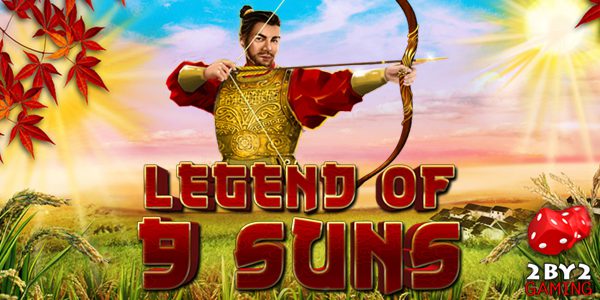 All twenty-five of those paylines are fixed into place, with you ultimately looking at minimum bets of 25p per spin.

What Are the Feature Symbols?

Unsurprisingly, the titular suns appear as wild symbols in this slot. The wilds are also the best-paying icons in the game. Sun symbols can substitute for any others except scatter icons. Scatters appear as blue amulet-looking symbols.

Those scatter icons can deliver scattered cash prizes whenever they happen to fall on the reels. Generally speaking, scatters are worth half the amount you can win with wild symbols. The scatter symbols in the slot can also trigger a free spins bonus if three or more appear on the reels at any time in the base game.

At any point in the game, the 9 Suns Feature may be triggered at random. When it is, between one and nine additional wild symbols can appear on the second, third or fourth reels. Any wins which feature these randomly added wilds will be doubled or tripled by a multiplier.

Is there a Free Spin Bonus?

You will start with 10 free spins if you have landed three scatters. That free spin figure rises to 15 or even 20 spins if 4 or 5 scatters are located on the reels. During the bonus round, the randomly triggered 9 Suns Feature tends to occur more frequently. This should result in more considerably valuable wins in the free spin bonus than in the base game. The feature can also be retriggered if further scatter icons appear on the reels while the bonus is being played.

Why You Should Play Legend Of 9 Suns Slot

Underneath all the gorgeous Asian imagery, the Legend of 9 Suns is a quintessentially basic video slot. The game is enjoyable, but you should genuinely take note that this game is a high variance release, and not expect wins to occur frequently.