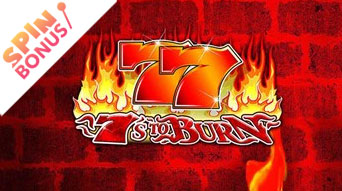 Barcrest is not explicitly known for its array of classic slots, but that is what they have brought to the table with 7s to Burn slot. The online casino slot features the customary 3-reel setup that any player would expect to find in a classic slot, although this release does happen to feature 5 paylines spread over those reels. As any player would expect from such a game, there are plenty of fruit symbols, stars, bars and bells splashed across the reels.

Of course, a game such as this is never going to cost players a packet to spin. Stakes can be adjusted using the directional buttons, but all 5 paylines are fixed into place. This means that at its cheapest, 7s to Burn is set to cost at least 5p a spin. Upping the ante, players can wager as much as £50 a game on this slot. A non-progressive jackpot worth 250x a total bet seems fair enough for this release, and the RTP (return to player) rate in 7s to Burn is generous for this type of game, sitting at 95.4%.

Historically, classic slots do not tend to offer too much in the way of special features or bonus rounds. That has been carried over with this Barcrest release. However, players will note that 7s to Burn slot does at least dish out wild symbols to players.

Wild symbols show up as flaming double 7s, which gives the slot its name. These are not generic wilds, though; they are rather specialised. They can only act in the stead of standard double seven symbols and not any other icons which appear on the reels, making their efficiency in helping players land a win somewhat limited.

7s to Burn slot doesn’t dish out lots of special bonuses as such, but it does have a Hi Roller Spins bonus. This is an optional side-bet and one that only players with enough funds are going to want to activate. The feature will cost you much more than a basic stake, but you get to play for 5 spins, and on each of those spins, the wild symbols are guaranteed to appear on the reels. However, there is a drawback and an unfair one at that. When playing with this feature, the payouts are halved. Given that you can only win half as much and you’re paying twice the rate, it is best to give this feature a miss.

This is a traditional classic slot, and when played for what it is, it can bring the memories of one-armed bandit gameplay flooding back. Players are not advised to use the Hi Roller Spins feature as it costs so much and offers very little change for those bets. You stand almost as good a chance of winning without it, and at least anything won in standard mode won’t be halved. Aside from that, this is a typical and predictable fruit machine release, and a rarity for Barcrest to boot.