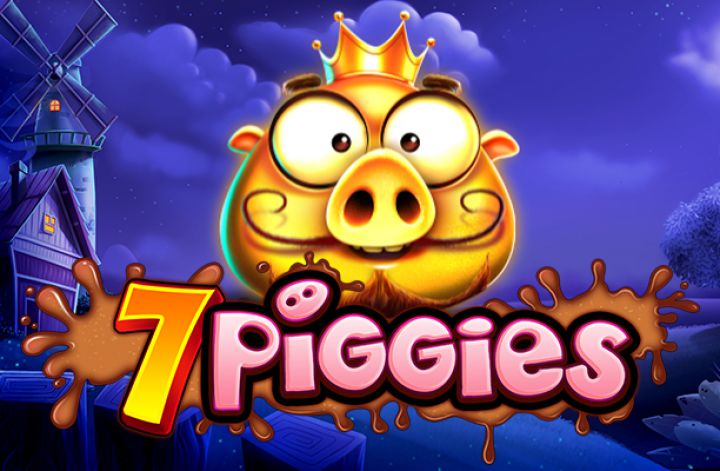 7 Piggies slot is just as cute as it sounds. As any player who has played our UK online slots before may note, the title characters in this release bear a striking resemblance to the infamous pigs in the Angry Birds series, in fact, the green pig with the builder’s hat is almost taken directly from the popular mobile game.

There are just 7 pay lines for you to bet on – like many other Pragmatic Play slot games which feature “7” in their titles – and minimum bets are, therefore, going to cost you at least 7p a game. Top stakes won’t exceed £35 a spin, and prizes are capped at 200x a stake. 7 Piggies is a low-variance slot, but one which has a high return to player (RTP) rate of 95.9%.

Now, back to the King Pig. This symbol appears in golden, and it substitutes for any of the other pigs in the game (Elvis, vampire, princess, baby and construction worker pigs) but not the barn. That barn forms the slot’s singular bonus icon. No cash prizes are paid out by wilds alone.

Barn bonus icons can trigger free spin bonuses. These scatter symbols will pop up anywhere and everywhere, and more importantly, they count no matter where they show up. Scatters appear at least three times on the reels during the base game will trigger the free spin bonus. It is the only such special bonus in this slot release.]

After triggering the free spin bonus, you will be rewarded with 5 free games and a 1x multiplier, initially. However, you can also click on any scattered barn symbols which appear, and these will add further free spins and extra multipliers to your tally. In total, each scatter symbol can offer up to 10 spins and up to 5x multipliers. After doing just that, you will be taken to the free spin bonus proper, where the feature begins. It can also be retriggered by landing more scatters on the reels, which is helpful.

Why You Should Play 7 Piggies Slot

If you’re a fan of bright and cheerful slots then 7 Piggies is for you, with super fun bonus features and an entertaining theme!