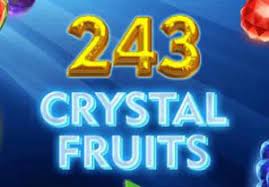 Little known Tom Horn Gaming is the team behind the 243 Crystal Fruits slot. Despite their relatively small stature, this is one of the best-known releases, and can commonly be found at leading casino sites that offer software from many different providers. As its title suggests, 243 Crystal Fruits features a combination of gemstone and fruit icons that form its theme.

The slot itself is about as basic and elementary as an online slot can get. Players are greeted by just five paylines straddling the slot’s five reels, and none of those can be adjusted. One would imagine that there aren’t too many players who would want to either way. Bets can be altered, though, with stakes ranging from 10p a pop up to £100 a spin. As with any fruit machine, the prizes aren’t going to blow players away.

At most, a win is worth around 40x a total stake, and this prize is paid out if five red sevens appear on any payline. Failing that, the next best-paying symbol in this game is the watermelon icon. RTP (return to player) rates are capped at 96% in this release.

Wilds are unmistakable in this online video slot. They appear as big blue crystals, and the words “Wild 243” are etched onto them for good measure. Wild symbols can substitute for any others a player may need to bag a winning line, and they can trigger the only real bonus round in the slot – the 243 Re-spin Feature. Unfortunately, wild symbols do not dish out cash prizes on their own accord.

A gamble feature can be found in this game, and it can be triggered by players following any win. Once it begins, players can choose to gamble their winnings in a simple card game. Players must choose whether the next card in the sequence is red or black. Correctly, guessing the colour of the next card will see players double their bet. Guessing incorrectly will see them lose any winnings they previously acquire right before activating the gamble feature.

When a wild symbol features in a win on the second, third and fourth reel, it will trigger the aforementioned 243 Re-spin Feature. In this bonus, winning symbols will explode and disappear, which leaves behind spaces for new symbols to drop down and take their place.

The more a player wins in this manner, the higher a multiplier bar will rise, located beside the reels. It is possible for players to win multipliers that are capped at 5x the standard rate of pay in this game.

Most players will understand straight away what type of game 243 Crystal Fruits is just as soon as they look at it, so there is no point in sugar-coating this review. This is a classic slot, but one which is played over a video slot format. That format includes a handful of features to boost the likelihood of landing a win, but 243 Crystal Fruits can’t really deliver anything other than simple slot gameplay.